Sorry, technical notes are not available for this vintage.

Let me announce it right from the start, 1990 has been the best Cabernet vintage since 1975.

Looking back to attempt to dissect the weather elements, the year 1990 started out with one of the biggest freezes in memory, giving the vines a deep hibernation and subsequent late budbreak.  Rainfall was low, being another successive drought year, and yields were low as usual. The summer was fairly normal but the fall was a vintner’s dream.  The pattern of even, moderate temperatures and cool, crisp nights continued for weeks throughout September and October.  This slow, even ripening developed the full potential of the Cabernet Sauvignon character and created a harmony in the wine which is unparalleled.

Irresistible flavors of raspberry, mint, blueberry, mountain sage, briar, vanilla, black currant, lavender and sarsaparilla attest to this completeness. If complexity is a goal, this vintage should live to be a benchmark.

Delicious now, I would suggest bottle aging for another 2-4 years and then drinking over a 8 – 10 year period.

NOTE: Starting with this 1990 vintage, our Cabernet program has changed. This wine is our previous Lathweisen Ridge produced form ten-year-old vines.  The traditional old-vine wine that has sported this label in the past is now designated Old Vine Reserve. 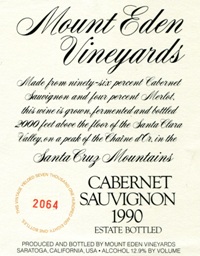 Smooth and earthy, ripe and smoky, plummy and dense, rich and fascinating. Drink in 1995.