Although a drought year, 2012 shaped up to be a great season across all the varieties we grow. A late bud-break led to a long uneventful summer and fall with no significant heat to worry about. A slow, leisurely harvest in late September insured complete ripeness at moderate sugar levels.

This Chardonnay was entirely barrel-fermented and aged on the yeast sediments for added complexity for ten months. All fermentations were not inoculated as is our usual practice. Our motto is “nothing added, nothing taken away.”

The grapes for this vintage come from Mount Eden fruit (60%) and Domaine Eden fruit (40%), reflecting a classic expression of the Santa Cruz Mountains.  A pale yellow color, tightly-wound acidity, and moderate ripeness with a dazzling finish, this wine is what I have been aiming for since 2004, when we began selecting barrels of declassified estate chardonnay for our Domaine Eden program. Subtle lemon, hazelnut, herb and earth aromas give way to flavors of citrus, toasty oak and mouthwatering acidity. For those who love Chardonnays which display restraint and finesse, this is for you. The finish is, of course, long and nuanced, giving an expectation for a long evolution in the bottle. 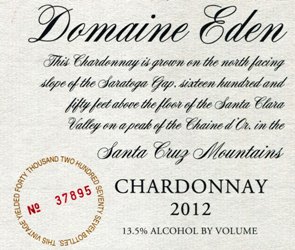 This more affordable cousin to the Mount Eden brand as just as good, though different. It presents dairy aromas of brie cheese rind and yogurt but in a deliciously approachable way, with diced chives, caramelized pear and citronella elements. The palate shows tremendous energy, with lots of lime and lemon pith, but also a sour-cream richness.—M.K.

The 2012 Chardonnay is a beautiful, open-knit wine to drink now and over the next handful of years. Hints of orange peel and mint add character to this classy, understated Chardonnay. The style is all about textural softness and polish. The 2012 is about 60% declassified juice from the Mount Eden program and 40% juice from the Domaine Eden property itself .Drink 2015-2020

Barrel fermented and aged in a mix of French and American oak (30% new), the 2012 Chardonnay Estate — released under the Domaine Eden label — was a little reductive on this occasion, but opened up to show plenty of ripe orchard fruits, honeysuckle, peach and white flowers notes with time in the glass. Medium-bodied, beautifully textured, rounded, and supple with lots of Chardonnay depth and richness, it’s upfront and ready to go now, but should drink nicely for 3-4 years at the least. —Jeb Dunnuck

Shows a greener side of Chardonnay, with pithy green apple, spice and honeysuckle notes, offering a lime-citrus accent that is distinctive and refreshing but tilts toward the tart side. Drink now through 2021.