Sorry, technical notes on this vintage are not available.

On the slopes of Mount Eden grow vines in an environment ideal for producing wines of intense character. Always just above the morning fogs of the Santa Clara Valley, the vines receive maximum exposure to the sun. And protected from the afternoon ocean fog by the Santa Cruz Mountains to the west, these vines receive only the cool breezes from that fog, for consistently mild temperatures.

The 1974 Cabernet Sauvignon is one of the pleasant results of these conditions. Picked at a sugar content of 25.4° Brix and total acid of 0.60%, the resulting wine is well balanced with considerable body and fruitiness.

In addition to twenty-six months of aging in Nevers Oak, this wine received eight months of bottle aging. A light fining with fresh egg whites softened the wine sufficiently to allow the amount of tannin to properly match the degree of fruitiness.

While this Cabernet is a balanced wine, it is an intense wine and will do well with time. 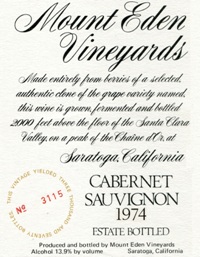 Mature, ripe, rich and concentrated, showing a deep, dark color and flavors to match; packed with complex currant, cherry, tar and spice notes that turn earthy and tannic on the finish. A monumental red that can age for years. 437 cases made. –JL

This small property in the Santa Cruz Mountains can produce some superlative Cabernets—the 1973 is probably the best of the vintage. This 1974 has a very dark color and a fruity/alcoholic nose. The taste is almost port-like with huge intensity of raisin-like fruit. It is never likely to be elegant, but the flavors are intriguing. Some 450 cases were released in 1977 at $12.00 per bottle. A second release of 135 cases was made in December, 1979, at $30.00 per bottle. 16 Very Good

Rating Scale for The Underground Wineletter: