Bottling: August 2013; no fining or filtration

2011 started off late just like its companions 2010 and 2012. Dry cool weather presided over the vines and the grapes ripened successfully under late autumnal skies. The Cabernet harvest occurred in the waning days of October and into early November. The average sugar level was 22 percent – not your typical year.

The style of the 2011 is transparency, both in texture and flavor. This is not a brooding, tense vintage which needs 15 years to open.  Classic blueberry and cassis aromas tinged with earth on the nose is followed by sweet oak and blackberry fruits on the palate, again tinged with earth notes in the finish.

Mount Eden just did a 41 year retrospective of our Cabernets over three days in Santa Barbara.  Every wine was distinctive going back to our inaugural 1972.  No wine served tasted old and all of the bottles—especially those from the 1990s—were memorable.

Given proper cellaring, the 2011 should out live most people reading this. 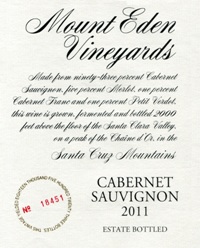 Mount Eden’s 2011 Cabernet Sauvignon offers a striking interplay of ripe, flamboyant fruit and supporting mountain structure. Fresh, vibrant and energetic to the core, this stunning, beautifully delineated Cabernet Sauvignon might need another decade to show the full breadth of its pedigree, but it’s all there. Pinot Noir and Chardonnay get most of the attention at Mount Eden, yet the Cabernet can be every bit as intriguing, just as it is here. The blend includes 5% Merlot, 1% Malbec and 1% Petit Verdot. Drink 2020-2037

Jeffrey Patterson’s Cabernet vines—most planted in 1980 and 1981 on Mount Eden’s spare shale-dominated soil—ripened incredibly late in the cool 2011 season. Most of the grapes were picked in November. In terms of sugar, it was a lean year, yet the wine feels completely ripe and healthy. (Patterson points out that the autumn rains that plagued many vineyards in the North Coast with mildew and botrytis issues were much lighter in the Santa Cruz Mountains.) This train comes in slowly, the flavors distant for a while, yet building inexorably toward Cabernet grandeur. As it takes on oxygen its aromas of mint and cocoa break through into a bright red, currant streak if energy. It has the umami-laden pungency of pure, varietal Cabernet from the Santa Cruz Mountains, the tannins firm yet pliable, harmonizing with the wine’s floral and herb aromas, mouthwatering acidity and the cedar bark character of its oak. It’s a vinous Cabernet to age for at least ten years.

The 2011 Mount Eden Vineyards “Estate” Cabernet Sauvignon is a beautiful and utterly classic bottle in the making, with a cool vintage signature on both the nose and palate that is very, very exciting for long-term cellaring. For the record, the wine comes in at 13.5 percent alcohol, so it is far from underripe, and offers up a superb, primary bouquet of cassis, dark berries, cigar wrapper, great minerality, a touch of violet, bitter chocolate, a whisper of dried eucalyptus and a deft framing of cedary oak. On the palate the wine is pure, full-bodied and gorgeously soil-driven, with a fine core of fruit, firm, ripe tannins, outstanding focus and grip, seamless balance and a very, very long and nascently complex finish. This is a legend in the making, but like all truly great young California cabernets, this is going to need plenty of bottle age to really blossom and show all of its multi-faceted layers of complexity. 2025-2075

Smoked meats, black olive and tight fruits of cranberry and elderberry meld with dried oregano and leather on the nose of this elegant, earthy bottling from the historic producer. It’s still tight and slowly unfurling on the palate, with elderberry and more barrel smoke alongside a rocky minerality. Drink 2018-2028.—M.K.

A blend of 93% Cabernet Sauvignon, 5% Merlot and the rest Cabernet Franc, the 2011 Cabernet Sauvignon Estate is deeper, richer and more structured than the Domaine bottling. Its inky purple color is followed by a Pauillac-like nose of lead pencil shavings, blackcurrants, singed cedar and tobacco leaf. This gives way to a medium to full-bodied, nicely concentrated Cabernet Sauvignon that has nicely integrated acidity, solid mid-palate depth and firm tannin, all of which should allow it to age gracefully for 15 years or more. —Jeb Dunnuck

Aromas of smoke and charcoal are evident and carry over to the palate, where they become dry and leathery amid a mix of dark berry, currant and gravelly earth. Shows some promise on the finish, where the flavors linger. Drink now through 2024.–JL