Sorry, technical notes on this vintage are not available.

Sorry, information on this vintage is not available. 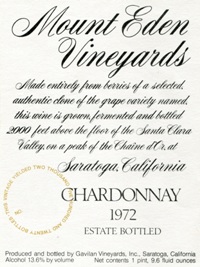 Years ago, M[oun]t Eden was chosen by Martin Ray as the one location in California best suited for the production of Chardonnay. His Chardonnays were legendary, and now that the vineyard has changed over…we are pleased to say that the same legendary excellence is still intact. M[oun]t Eden Chardonnay is without the shadow of a doubt the rival of Le Montrachet, the most famous, and perhaps best, white wine in the world. The total production of M[oun]t Eden is so small that the wine is closely rationed, but we got our hands on a little bit, and it’s here for sale to those who want the best. If it’s good enough for Martin Ray, by golly it’s good enough for you! M[oun]t Eden Chardonnay retails for $20 per fifth. Too high? Well, the nicer the nice the higher the price.

Golden orange in color, with a honeyed, sauternes-like nose. Drying, a bit like sherry. Still alive, but past its prime. 14 1/2 Good