Bottling: July 2013; no fining or filtration

The Domaine Eden Cabernet is an amalgam of vineyards in the towns of Saratoga and Los Gatos. It is the only one of its kind from the Santa Cruz Mountains. Longtime friends: McCarthy Family Vineyards, La Rusticana d’Orsa, House Family Vineyards, Tsai Family and of course Mount Eden and Domaine Eden all contribute to this wine. Year in and year out, the ultimate blend always seems better than the sum of its parts, a gestalt. 2011 was an abnormally wet year for our region and the winter extended into the spring. The harvest occurred in late October and into November shaping the character of the wine.

We ferment each lot separately and barrel them individually for the first year. In the second winter of the wines life we create the blend, which is quite complex usually dealing with 30 different lots. After blending we continue to barrel age, bottling the wine after two years in barrel.

Predominantly Cabernet Sauvignon (75%) along with Merlot (14%), Cabernet Franc (6%), Petit Verdot (4%) and Malbec (1%) the wine displays a plushness and generosity at this early stage. Seamless in texture with abundant fruit and moderate tannins, this wine should drink well early, yet should age gracefully for 15 years or more. 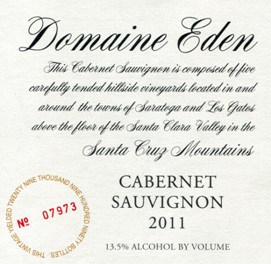 Domaine Eden’s 2011 Cabernet Sauvignon, from vineyards in Saratoga and Los Gatos, is wonderfully fleshy and open in the glass. Sweet red cherry, plum, savory herb, menthol and floral notes all meld together in a tasty, foreword Cabernet Sauvignon to drink now and over the next handful of years. There is plenty to like here, including the wine’s inviting personality and impeccable balance. Drink 2014-2019

A terrific value, the 2011 Cabernet Sauvignon Domaine Eden has a distinctly Bordeaux-like personality in its blackcurrants, shaved pencil lead, tobacco leaf and wet stone-like aromas and flavors. Medium-bodied, supple, elegant and balanced, it’s not a heavy weight but excels on its balance, freshness and purity. Made from 75% Cabernet Sauvignon, 14% Merlot, 6% Cabernet Franc, 4% Petit Verdot, and 1% Malbec that was raised 22 months in French and American oak, drink it anytime over the coming 6-8 years.—Jeb Dunnuck