Bottling: August 2014; no fining or filtration

The Santa Cruz Mountains holds a special distinction. It is home to the only two estate-bottled mountain Cabernets that are truly influenced by the Pacific Ocean and both have been at it awhile: Ridge Monte Bello (1962) and Mount Eden Estate (1946). If you appreciate the qualities that result in Bordeaux varieties grown on the edge—namely, low alcohols, earth-driven flavors and unique terroir—these are the best examples.

2012 was a great California Cabernet vintage. Even though a drought year, the season was long and cool. Harvest started on October 4th and ended October 26th. The slow autumnal ripening allowed the fruit to develop beautiful depth and complexity. Finally, after two years in our cellar and two years in the bottle, we present this extraordinary wine.

Distinctive aromas of blackberry, black pepper, cardamom, sage and earth abound. The flavors are rich and balanced (13% alcohol) with impressive depth on the mid-palate. The acidity is high, indicating a long evolution yet the balance of tannin is integrated. 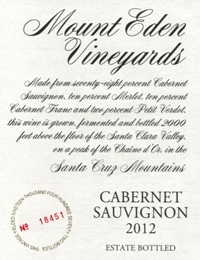 The very soon to be released Mount Eden cabernet sauvignon is an absolutely classic in the making. It is a tad less ripe than the lovely 2011 version, coming in at an even thirteen percent octane and offering up a very pure and nascently complex bouquet of black cherries, a touch of eucalyptus, cigar wrapper, dark soil tones, lavender and a nice, judicious framing of nutty new wood. On the palate the wine is pure, full-bodied and rock solid at the core, with excellent focus and grip, ripe, seamless tannins and outstanding length on the very refined, youthful and impeccably balanced finish. This is an old school bottle of cabernet in the very best sense of the term, with great potential that is simply waiting for the passing of time to blossom and shine. But, it is properly structured out of the blocks and will need time in the cellar to start to really drink with generosity. It should prove to be very long-lived, once it reaches its plateau of maturity. 2025-2075+.

Extremely elegant and restrained at first on the nose, this bottling eventually shows gravel and crushed rocks, with hints of blackberry and forest underbrush also emerging. A very firm structure weaves together an incredibly well-integrated wine, with dense mulberry and dried-fennel notes that morph into crushed herbs with time. Drink 2018– 2032.—M.K.

The 2012 Cabernet Sauvignon is a rich, intense wine that tastes much riper than the 13% stated on the label. Black cherry jam, plum, game, mocha, licorice and dark spices are all pushed forward. I would prefer to give the 2012 at least a few years in bottle to shed some baby fat. Drink 2020-2032.

The 2012 Cabernet Sauvignon Estate (78% Cabernet Sauvignon, 10% Merlot, 10% Cabernet Franc and the rest Petit Verdot) is beautiful. Giving up lots of black and blue fruits, tobacco leaf, sweet oak and graphite, this fabulous Santa Cruz Mountain Cabernet is medium to full-bodied, nicely concentrated and focused, with fine tannin and impeccable balance. It shows its class on the lengthy finish as well. It’s a baby and needs to be forgotten for 4-5 years and will have more than two decades of overall longevity.

Like the 2012 Monte Bello grown one ridge to the north, the 2012 Mount Eden Cabernet is surprisingly open and welcoming in its youth. It has the mountains’ characteristic black olive and rosemary scents, but presents them in a polished, gently buffed texture that’s already delicious, its firmness implicit rather than explicit. You could decant this now for lamb, although its savory tones should take on more complexity with ten years in bottle.

Dense, brambly blackcurrant nose with lots of aromatic punch. Rich, ripe and seductive palate with sweet, intense fruit of considerable purity. This has finesse, line and poise, and good acidity on the finish. Classically structured. Drink 2016-2030. – 91 points (Average for group)

At 460m, up in the Santa Cruz Mountains, Jeffrey Patterson has long made small quantities of very refined Cabernet—a bit cooler in style than counterparts from Napa. This 2012 has the poise and finesse one has come to expect from this magical site. Drink 2016-2030. – 93 points – Stephen Brook

Claret-style in the range of ripeness, flavors, structure and use of cedary, tobacco-shaded oak, this wins points for the understated elegance and restraint, a style rarely seen in California these days but one with appeal. Drink now through 2026.–JL