The growing season in 2012 was as good as one could hope for as a winegrower. Lingering winter weather pushed the bud break into April—similar to 2010 and 2011. The all-important flowering occurred under perfect conditions and the crop was abundant.  Harvest was late and leisurely, giving the wines great balance, depth and length.

Complex soil driven aromas of mint, sage and hazelnut are very inviting. Elegance—and by that meaning power with grace—is what comes through on the palate. Flavors combine essence of lemon, green apple and honeysuckle leading to an expansive finish.

Built to last—with good cellaring, expect further development for another three years and a drinking plateau of twenty. 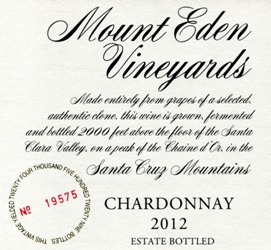 Jeffrey Patterson has been making vivid, intense, ageworthy wines from this vineyard since 1981 and it consistently produces fantastic, Burgundian-Style Chardonnays. Barrel-fermented, aged in  50% new French oak, on the lees, the 2012 is striking and very classy, with aromas of lemon oil, deep mineral notes, and an amazingly long finish. Domaine Eden Chardonnay, the second wine, is a true bargain. Drink 2016-2026.

An utterly enticing, striking wine, the 2012 Chardonnay is captivating from the very first taste. Lemon oil, white flowers and mint are some of the signatures. The 2012 remains subtle and hushed in the glass, with striking interplay of fruit, acidity and bright saline notes. Above all else, the 2012 speaks to pure class. Once again, Mount Eden’s Chardonnay stakes its claim as one of this country’s oenological jewels. The 2012 appears to have a very bright future. Readers who can find it should not hesitate to pick it up. Drink 2015-2027

Seared yellow grapefruit, white flowers and a hint of almonds make for a fresh but simultaneously nutty nose on this classic bottling from the historic producer, whose grapes come from the top of the high-elevation appellation. The extremely energized palate is enlivened by flavors of salted lemons, a buttery warmth and racy yet rich minerality, from chalk and slate to graphite and flint.—M.K.

Pure class, the 2012 Chardonnay Estate (barrel fermented and aged in equal parts new and 1-2 year old barrels) sports a light gold color to go with classic apple blossom, crushed rock, white flowers and vanilla cream-like aromas and flavors. Rich, full and textured on the palate, yet with vibrant acidity, it’s clean and classy through the finish, and has impressive depth of fruit and length. It’s enjoyable now and I suspect it will evolve nicely as well. —Jeb Dunnuck