2014 was a drought year of extreme dimension. As a winegrower, I feared what to expect with only fourteen inches of rain to carry the vines through the long growing season. This was unprecedented in our seventy-year history as a wine estate.

What to do? Protecting the long-term health of the vineyards I’ve planted and cared for all my life was more important than anything else. So we cut way back at pruning and reduced the crop by 50%.

Harvested in mid-August (the new normal?) the fruit was surprising—with full acidity and flavor. This Chardonnay has aromas that are penetrating with lemon, hazelnut, and gardenia blossom. It is invigorating on the palate, with flavors of lemon, earth, and pear. Super long on the finish, this predicts a twenty-year life in the bottle. 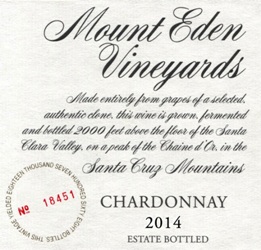 The 2014 Chardonnay Estate from Mount Eden is terrific, offering up a youthful bouquet of buttered apples, pear, toasted nuts and brioche that revels more and more nuance as it sits in the glass. On the palate, the wine is full-bodied, pure and racy, with a satiny attack, deep core and bright acids. The finish is long and mouthwateringly chalky. This is one of the best recent released of the Estate Chardonnay, and it comes warmly recommended. —W.K.

The 2014 Chardonnay Estate comes from 43% of the average yields (it was a tiny crop due to the drought) and was barrel fermented in 70% new French oak and aged 10 months on lees before bottling. It’s another youthful, slightly reserved Chardonnay that’s going to benefit from cellaring. Brioche, buttered citrus, almond paste and honeysuckle all give way to a beautifully balanced, layered, rich effort that has vibrant acidity as well. There’s 1,495 cases.

An oil-like shade of yellow in the glass, this is still a baby, showing aromas of walnut, seared lemon, yogurt, white flowers, oak and smoke. The acidity is pure and strong, cutting through the nutty flavors and savory richness. Sea salt, browned butter, Meyer lemon peels and orange marmalade flavors will only grow more cohesive with time. —M.K.

The 2014 Chardonnay (Santa Cruz Mountains) is a rich, almost viscous wine endowed with palpable intensity in all of its dimensions. Orange peel, apricot, mint, wild flowers and chamomile are all nicely pushed forward. Deceptive in its mid-weight feel, the 2014 possesses quite a bit of structure. Even so, it is the wine’s precision and energy that I find most impressive at this stage. I would give the 2014 at least a few years to fully come together, as it is pretty tightly wound, even after a few hours of aeration.

The spicy oak is dominant, giving this a cedary flavor and texture, slowly rolling into a core of pear, melon, fig and apricot notes. Drink now through 2023.—J.L.

Faced with the driest season since Martin Ray founded the estate in 1945, Jeffrey Patterson cut back his crop by half, to diminish the stress on his vines. It turned out to be a very early harvest, with chardonnay starting on August 9th. That might explain the reticence of the wine, with pale pear and citrus notes turned golden by their time in oak. The rich and supple texture is worth the price of admission for now, though the flavors should develop far beyond their current mint and caramel hues with a few years in bottle.