Bottling: July 2016; no fining or filtration

A pure expression of our footprint, the mid-appellation of the Santa Cruz Mountains, this wine consists of 75% Cabernet Sauvignon, 14 % Merlot, 6% Cabernet Franc, 4% Petit Verdot and 1% Malbec. All of the wines were fermented on their native yeasts and barrel-aged twenty-two months, with no fining, no filtration prior to bottling. The Sauvage of the Cabernet Sauvignon is tamed by the other varieties. This is the beauty of blending when crafting wine in the Bordeaux tradition: the whole is greater than the sum of its parts.

2014 was a challenging vintage, being in the midst of a multi-year drought. Rainfall was at an historic low and we severely reduced the crop during the winter pruning. An early harvest ensued in September. Because of the small crop, the wine has incredible richness and persistence. I am reluctant to admit that small harvests are always better, but after thirty-seven years of winemaking, it seems to be true in 2014. 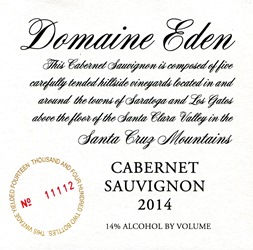 The Most Exciting Wines of 2017

Juicy and attractive, this has herbal notes on the nose to complement the dark black fruit characters. Appetizing chewy tannin and expressive red and black cherry fruit. Refined now, this will improve. Drink 2018-2025 (Tasted by Panel)

Jeffrey Patterson blends this wine from five Bordeaux varieties—mostly cabernet sauvignon—and from five vineyard sites, including Mount Eden, Domaine Eden and three other growers in Saratoga, It’s a silken 2014, with tannins that are as dark and tight as wild blueberry skins. Those tannins give it a youthful savor, though they don’t detract from its immediate drinkability, offering a delicious and distinctly Santa Cruz Mountains Cabernet.

The 2014 Cabernet Sauvignon from Domaine Eden is a touch more reserved today than it was a year ago, opening in the glass with aromas of crushed wild berries, raspberries, raw cocoa and tobacco, all framed by cedary new oak. On the palate, it’s medium-bodied, deep and concentrated, with a nicely layered mid-palate, fine tannins and a tangy finish. Cellar it for a couple of years and then follow it for a decade or more. —W.K.

The 2014 Cabernet Sauvignon packs a serious punch. A rush of black cherry, plum, herb, graphite and smoke fleshes out in an exuberant, fruit-driven Cabernet Sauvignon that offers considerable near and medium term appeal. Although not especially complex, the 2014 has a joyous radiance to it that will make it impossible to resist upon release.

The 2014 Cabernet Sauvignon is 75% Cabernet Sauvignon, 14% Merlot and aged 22 months in 20% new French and American oak. It offers a pretty bouquet of lavender, leafy herbs, tobacco leaf and cassis fruit in a medium-bodied, supple, nicely textured style. It doesn’t have the purity or elegance of the Estate release, yet has lots of character.