Bottling: August 2012; no fining or filtration

2010 was an epic year for our Cabernet vineyards. As always, the weather drove the vintage style. A long and cold winter set the stage for a late start to the growing season. Coolness overall was the theme, which is typical of our mountain climate, but even more so in 2010. A late harvest commenced, giving the grapes ample time to ripen through October.

The hallmark and beauty of this year is transparency of the fruit and abundant complexity. Black fruit, incense and sweet spices in the nose, with silky tannins and an endless array of violet, sage, espresso and grilled herbs on the palate, this Cabernet has exceptional overall balance and personality with an elegance that reminds me of a bygone era. 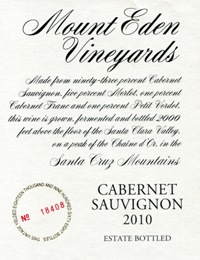 Most of the fruit for this restrained, savory Cabernet comes from cutting Emmett Rixford purportedly sourced from Château Margaux in the 1890s. Martin Ray propagated his own cuttings from that selection to plant in this vineyard’s shallow, shale-laced soils at 1,800 feet of elevation in the 1940s and 50s, and later Jeffrey Patterson replanted it in the 1980s with a selection from those vines. Is it just a coincidence that, tasting this blind my thoughts turned to a 1985 Margaux I tasted recently? Maybe it was the gentle elasticity of the texture, the vibrant acidity, the rosy glow streaming through a curtain of ripe, earthy tannins. This feels layered with complexity: Beyond the pure cassis tone you might find lavender, graphite, redwood bark, black olive and green herbs. But you don’t need to go fishing for descriptors to appreciate its nuances: just think of it as lovely, integrated, old-school California Cabernet. Buy a case and try not to drink most of it until 2030.

The great cool, 2010 brings out the wines inspiring complexity, as layers of black fruits find depth with a panoply of savoury accents. Balanced, earthy and integrated.

Often the most overlooked wine in the Mount Eden range, the 2010 Cabernet Sauvignon shows the pedigree of this great vintage. Firm veins of tannin support a core of black fruit, tar, grilled herbs, smoke and incense in a wild, savory mountain Cabernet Sauvignon that dazzles with its exceptional overall balance and personality. This is another fabulous new release from Mount Eden. Drink 2016-2030

Slightly funky scents of asphalt and sweaty socks come along with graphite, pressed blackberry and New Mexico chili. The palate is led by tobacco-laced zing, opening with boysenberry flavors, and finishing with decent acidity and mount-coating tannins. —MK