Bottling: August 2006; no fining or filtration

A small harvest of miniature berries was what the vineyards gave us in 2004. Wine enthusiasts often ask and wonder about the art of winemaking. What I often wonder about is the art of resilience; the challenge of transforming carefully tended fruit into profound bottles given the wildly changing nature of the vintage.

The 2004 Cabernet Sauvignon presents a beautiful balance with typical Bordeaux-like character. Abundant earth with pointed aromas emphasizing blackberry and cassis, this wine is elegant on the palate with a forward finish of well-defined currant, herb, and cedar. 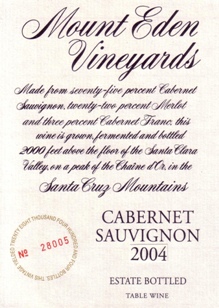 This 2004 Cabernet Sauvignon exhibits an opaque ruby/purple hue followed by pure, unevolved, black currant, raspberry, crushed rock, and spring flower-like notes.  Very primary, it tastes more like a barrel sample than a finished wine, but it possesses enormous potential because of its combination of elegance, structure, and intensity.  It should be forgotten for 7-8 years, and drunk over the following three decades.

Here’s one to put away for awhile.  Even though the warm vintage coaxed out oodles of black currents, blackberry and cherry pie filling, red plum and dry, unsweetened chocolate flavors, the wine has a tannic intensity that makes it a bit astringent.  But it’s balanced and well-structure, so cellar; and should be best 2009-2012.—S.H.

Intense cherry and blackcurrant on the nose, with vibrant minerality adding lift.  Licorice and sweet chewing tobacco flavors complement chewy dark berries and kirsch, with slow-building tannins adding support without detracting from the fruit.  Gained ripeness and depth with air while maintaining energy.